You are here: Home1 / Meet the members of GNSI New England2 / Sandy McDermott 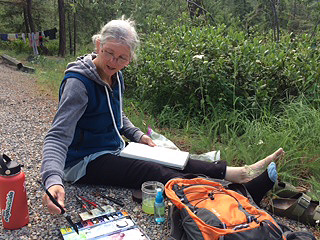 Sandy McDermott, a native of maritime Canada, was raised in New England where she received a BA in Art.  She went on to receive a Graduate Certificate in Natural Science Illustration from the University of California at Santa Cruz.  She is the illustrator of several books, numerous t-shirt designs, logos, trail signs, brochures, murals and magazine articles.  Sandy has been teaching and sharing her passion for drawing the natural world since 1998 and has been a freelance Natural Science Illustrator since 1992.

She now lives in the mountains of New Hampshire with her husband Sean, daughter Kelsey, and two dogs named Oreo and Hawkeye. More of her work can be viewed on her website www.sandymcdermott.com.