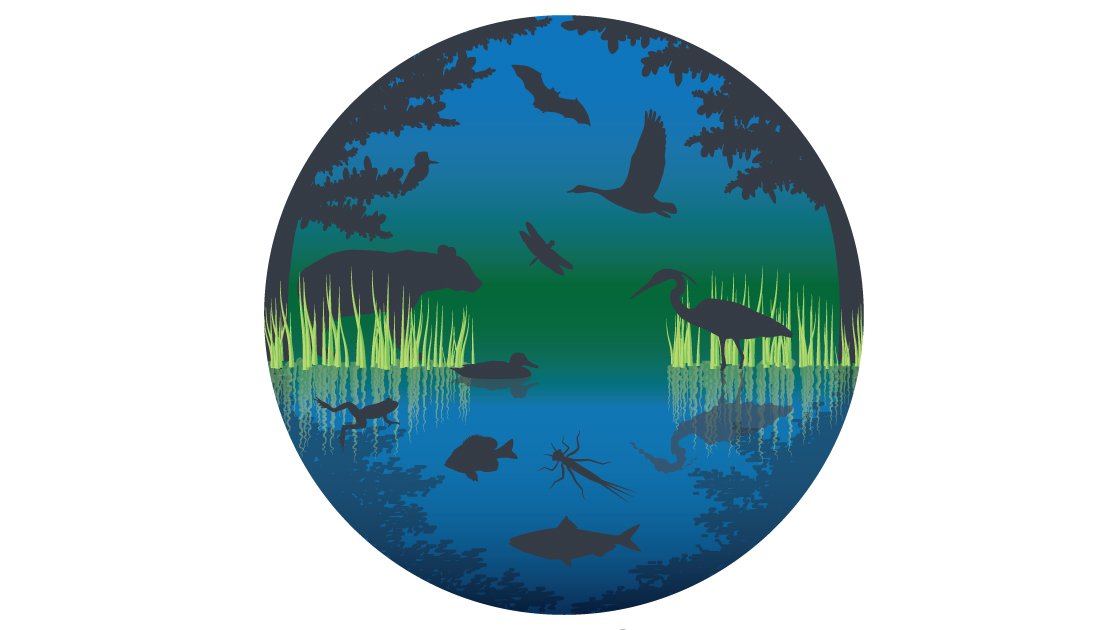 New England watersheds contain a vast array of ecological systems. Each of these ecological systems supports a wide variety of biodiversity from the upland headwaters all the way to their termination into the sea. All this biodiversity relies on the precious resource of water flowing past, on a constant journey from the land to the rivers to the sea. The members of GNSI-NE are celebrating this biodiversity in their chosen media, to help bring awareness to the fragile communities which rely on these watersheds all through New England. Their overall health, and ultimately our own, relies on healthy watershed systems.

Exhibit entries will be added to this online gallery during the month of September 2020. Check back often to see how this exhibit evolves over time, much like floating down a meandering riverway and encountering the species that call the river their home. Please note you can click on the (Bio) link next to the artist’s name to view their bio page, clicking on the image itself will provide you with a larger view on it in Lightbox and clicking on the “Click to read more” link will scroll out the complete write up for the illustration.

Thank you for taking the time to visit our online exhibit and be sure to keep coming back and share the link with your friends and family. Feel free to share this page on social media so other people may enjoy this exhibit. Our hope is to be able to install this exhibit live in 2021. For now, online viewing will have to suffice.

Artists comments about their subject:


Clubtail dragonflies (Gomphids) get their name from the flared segments at the end of their abdomen, more noticeable in males. Another distinction is the set apart eyes in green, blue, or grey.  These 2 to 2.5-inch dragonflies also have striped bodies, helping with camouflage, and unspotted wings.

Can you imagine seeing it dart through the cattails or alighting on a lily pad? Perhaps it will find prey sneaking out from under the arrowheads or wapato. They fly early in the dragonfly season and keep low. They prefer well-oxygenated, unpolluted waterways with silt, sand, gravel, or leaf litter the ambush-predator nymphs can bury into.
Zebra Clubtails are endangered in Massachusetts. Besides pollution, habitat loss, even fast watercraft, some Gomphids are also threatened by zebra mussels, an invasive species that eats up plankton and clogs waterways.  Some Gomphid naiads have even had zebra mussels attached to their backs, blocking them from emerging when it’s time to leave the water!
Click to read more 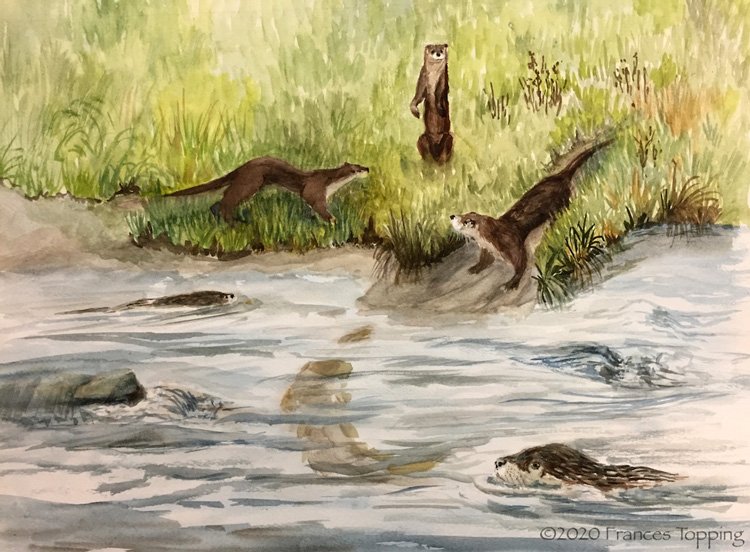 Artists comments about their subject:
River otters can be found in all the New England states, in most of the watersheds, riverine, marsh, lakes, swamps and coastal situations. These areas provide the water habitat they require for shelter and nursery with an underwater exit. Alternately they sometimes use other creatures’ dens or under rocks or even logs for their shelters.

Fish are their main food source but otters are opportunistic and carnivorous, amphibians, crayfish, snakes, insects and small mammals may all be food at times. Their eyes and noses close out water and sensitive whiskers allow them to search for prey in murky water. Their webbed feet make them strong swimmers. They have few natural enemies; bobcat and coyote can take them but people used to kill them for their thick, warm pelt (hide) or for sport, and because they kill fish, which fisherman wanted for themselves.

Beavers often help provide suitable habitat by ponding water and creating lodges which otters will re-use. As described above, many species are their prey. They provide balance by helping control these various species of prey. Environmental pollution, habitat loss and hunting decimated numbers but river otters are increasing due in part to more sustainable hunting practices, better wetland conservation, and pollution control thereby restoring a more balanced ecosystem.

This large member of the weasel family exhibits the fierce fighting characteristic of the species but also it is very playful, bounding and sliding down snow or mudslides and generally swimming in family groups. They are crepuscular and somewhat secretive. Look for them mostly in the early morning or evening hours to watch such a display. I chose to focus on this species because I wanted to portray the river otter’s playfulness in the water and on land. 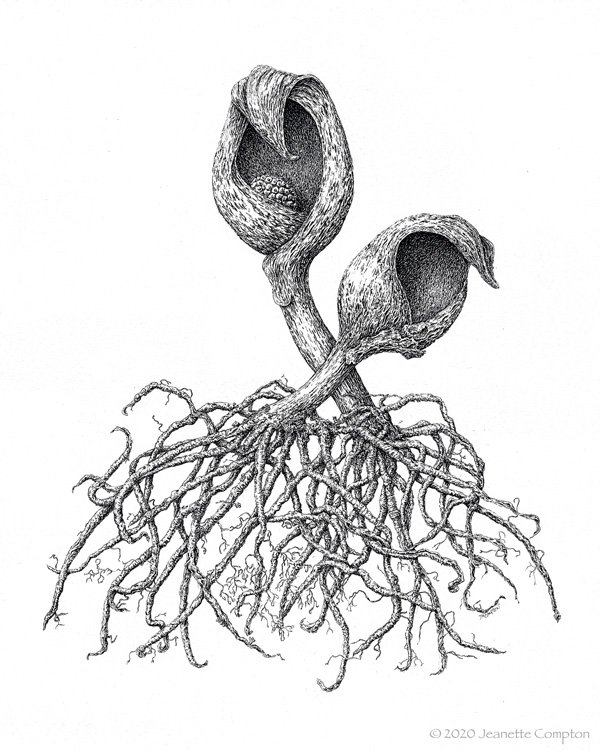 Artists comments about their subject:
Eastern skunk cabbage grows in the wet swampy soil of woodlands, often along streams. Among the first plants to bloom in very early spring, the skunk cabbage is able to generate its own heat, allowing it to push through frozen ground and snow.

During this time deer may eat its leaves, even though the plant contains crystals of a poisonous compound called oxalic acid. Bears may dig and eat the roots. Early emerging insects, including some beneficial wasps, are attracted to the pungent smell of skunk cabbage’s flowers. The leaves of the plant die by late summer and the plant goes dormant until the next spring. Leaves provide food for insects while the plant is alive and after they have begun to wither.

Skunk cabbages have been known to live for many years.  The deep root system of the plant helps provide stability in mucky, swampy areas.  Its roots help with erosion and the permeability of the soil.

I chose the Eastern skunk cabbage because the “otherworldliness” of this plant has always fascinated me.  It was so interesting to draw.

Mary Oliver, in her eponymous poem, Skunk Cabbage, says of the plant, “What blazes the trail is not necessarily pretty.” 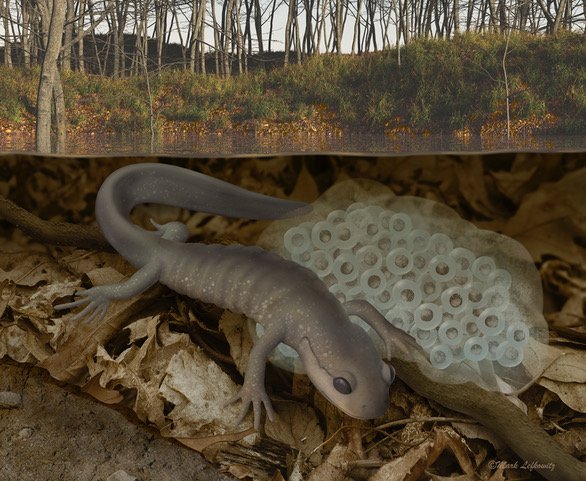 Artists comments about their subject:

Jefferson salamanders can be found throughout many riverine watershed areas in New England. Adult salamanders prefer spending much of the year in underground burrows: steep, rocky areas with cover. Their breeding sites are shallow, temporary woodland ponds (also known as vernal pools) with plenty of organic debris for attaching eggs. After the eggs hatch, the larvae remain in the pool until metamorphosis occurs.

Adult Jefferson salamanders feed on insects, slugs, worms, and other small aquatic and terrestrial invertebrates. Salamander larvae are found to consume small zooplankton after hatching and then move onto other organisms such as nematodes, aquatic insect larvae, insects and snails. Both adult and larval stages are a food source for crayfish, giant water bugs, snakes, birds, shrews, frogs, fish, skunks, raccoons and other small mammals.

Salamanders and other amphibians are increasingly being used as indicators of environmental health. Salamanders have also proven to be valuable tools in examining various problems in disciplines such as evolution, ecology, animal behavior, physiology, and genetics.

I chose the Jefferson salamander because I found the shape and coloration of this salamander to be quite beautiful and believed that an image depicting a salamander in a “split-screen” view, showing both the adult and breeding habitats would be both informative and visually interesting.

More images to come as we travel further down the virtual river…. come back soon!

1 entry.
Wendy Chadbourne from Lakeville, MA wrote on September 7, 2020 at 12:03 pm:
Checking to see that our guestbook is up and running smoothly. Feel free to post an entry if you wish.